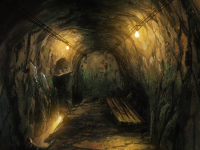 Inside the Diamond Mines, there are numerous paths that could cause one to be lost had it not for the useful technology which kept the tunnels not be dull, and yet there are the harmonious stories behind the walls if one knew where to look. About 30 miles underground there was a group of excavators, seasoned veterans on top of that seeking to mine minerals so that they could earn their hard work in money. Little did they know this was about to be affected on both physiological and physical level.


The lights flickered like it was a scene from a horror movie causing the miners to be startled by this. A whisper can be heard among the crowd as the tools themselves stopped working as a result of the Anmaku event and before they knew it. Their sight was stripped from them as their dependency on electrical devices to illumine their environment had stopped working rendering about 30 men to be blind and unable to find their way out in the cave. 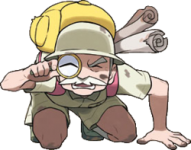 After the sudden and devastating declaration by the being known as Madoguchi, it would seem as though as he had retreated into the chakra source as fast as he had arrived. Due to this sudden retreat by the alien threat, the world leaders have ordered all citizens' return effective immediately.